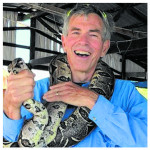 internationally renowned geophysicist and beloved father and spouse, passed away on September 8th, 2021 while surrounded by his family. Fred is survived by 5 sons, 4 grandchildren and one sister.

In recognition of his outstanding contributions Fred was appointed as a Chevron Fellow in geophysics and his impact is still evidenced by numerous influential mentees, publications, patents, and awards throughout his extensive career.

Fred was born in Stamford, CT and grew up in Hibbing, MN and Mountain View, CA. He graduated from Stanford with a Masters in Geophysics and was the Valedictorian for his class.

Fred was an extremely active, fit guy who had a passion for sports of all kinds. He was an avid golfer, daredevil skier, very competitive runner, and (of course) a big Warriors fan.

Fred loved adventure travel which he was able to share with his family on many occasions. He lived and/or worked in 51+ countries, and visited all the continents. His adventures took him from base camp at Mt. Everest to the summit of Mt. Kilimanjaro. He dipped into the Antarctic Ocean and ran races through the jungles of Thailand. He survived a cyclone in Tonga, riots in Columbia, flooding in Myanmar, a stampede of wildebeests in Zimbabwe and being held at knife point while on a field crew in Sumatra.

Fred was a legend whose legacy will live on. Heaven became richer and we became poorer with the loss of a true servant leader, one whose excellence and enthusiasm encouraged many others to join him in his pursuits. We were better with him and his mark on our lives will remain with us always.